Air samples were collected in consecutive days using Summa canisters from semiconductor foundry clean rooms and air entrances. By coupling a NuTech pre-concentrator with an Agilent GC-MS, an optimized method for qualitative and quantitative analysis of VOC compounds was developed. Method detection limit (MDL), blank spike (BS) and blank spike duplicate (BSD), etc. were estimated for method validation. Identification and distribution of VOC species in various Fabrication modules were made and compared. Possible origins were discussed. Impacts of some species on semiconductor process were discovered. Furthermore, a preliminary research of wafer surface contamination was conducted.

The monitoring and control of VOCs, which are widely spread in an atmospheric environment and easily accumulated in a close room like fabrication (Fab), have been highlighted in semiconductor industry for the last few years with the narrowing of critical dimension. These airborne molecular compounds do not simply raise health concern on staff but influence some processes as well.

However, contamination of VOCs often occurs in a low level that in this paper a two-step pre-concentration is executed prior to GC/MS analysis and method evaluation is acquired. Also, inner-passivated SUMMA® canisters are applied in sampling. Distribution of major species is illustrated and possible origins of them are deduced. Further remarkable loss is ceased by verification of VOC contamination, which caused killer defects. Organic contaminants adsorbed on wafer surfaces from actual cleanroom air are also analyzed. Some species show a strong potential to block the active sites and are more prone to cause defects.

Specially passivated SUMMA® canisters were sequentially cleaned by pressurizing to 206 Kpa with a humidified high purity (8N) nitrogen and evacuated to 0.02 Kpa for 8 cycles at 105℃. One canister was randomly chosen from the group and tested as a blank after repressurized to 206 KPa. Then it was re-evacuated to 0.02 Kpa and the whole group was “clean” and ready for sampling if no target VOCs were observed higher than 0.2 ppbv. Samples were sucked into clean canisters to an atmospheric pressure and the inlet was recapped to prevent contamination.

A hyphenation of a NuTech 3550A (DS) cryogenic preconcentrator and an Agilent 6890/5973 GC/MSD was used with mounting of a 60m×0.32mm×1.8μm VOCOL capillary column. A two-step enrichment of samples was carried out prior to GC/MS analysis. In the first module, 200 ml of an air sample was piloted into the system by a vacuum pump at a normal speed of 90 ml/min via a mass flow controller (MFC). The VOCs were concentrated in the cryotrap (1/8” OD Nickel packed with 80 mesh unsilanized glass beads) at -150 ℃ while other components were pumped out remaining gaseous state. A constant amount of Internal Standard was also introduced. This mixture was heated up to 160 ℃, desorbed and refocused on head of the capillary column, which was inside the cryofocus (also precooled to -150 ℃). Finally a some less than 1μl sample with a heating speed of 350 ℃/min to 180 ℃ was injected into GC/MS for analysis. Due to the specially designed interface between preconcentrator and GC/MS, an approximate zero dead volume effect was achieved. A BFB tune was passed of GC/MS before its operation. 9N Helium as a carrier gas was kept at a flow rate of 1.3 ml/min during analysis. Atemperature program was also applied for better separation of VOC species as follows: initialized at 35 ℃ and programming to 80 ℃ at 4 ℃/min, to 150 ℃ at 8 ℃/min, to 200 ℃ at 10 ℃/min and kept isothermal for 10 min. The EI source was set at 230 ℃ and scan at a rate of 6.61 scans/sec from 45 to 250 amu range (0~7.5 min), 6.35 scans/sec from 35 to 250 amu range (7.5~35 min).

A commercially available US-EPA TO-14 mixed calibration gas (39 species of compounds, balanced in nitrogen) was supplied at 100 ppbv. This gas was further diluted into 5ppbv for actual use by an automated pressurization system. Besides, a mixture of Benzene-d5,chloro-(IS), Methane,bromo-chloro-(SS), Benzene,1,4-difluoro- (SS) and Benzene,1-bromo-3-fluoro-(SS) (all 2 ppmv, balanced in nitrogen) was also applied as Internal standards. 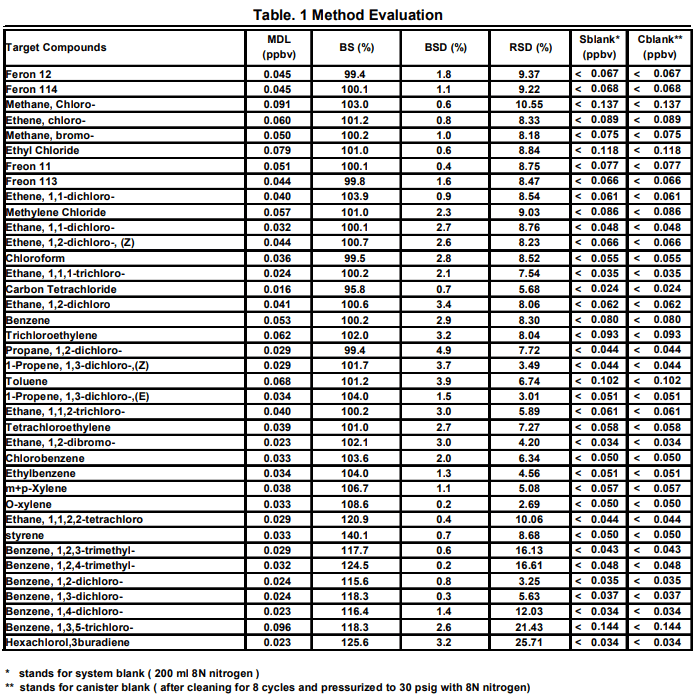 Grabbing samples were collected from the air of two class – 100 cleanrooms. Room 1 and 2 apply a 0.18 μm aluminum and a 0.13 μm copper production, respectively. Air samples in 7 different production modules of Room 1 were monitored consecutively for a month and averaged. As for Room 2, VOC contamination was suspected to influence one step of the process severely and samples at air entrance before MAU (Make-up Air Unit) and those in the cleanroom were compared for 6 consecutive weeks to explore possible correlations between VOC level and product quality.

For a further study of specific killers of the mentioned defect, dummy wafers covered with barrier and seed layer were placed in true cleanroom environment for 5 days and then heated at 210 ℃ for an hour in a 20 L airtight chamber. 6 L outgassed sample was collected into the canister for qualitative estimation. A 6 L of surrounding room air was also analyzed.

Internal standard calibration curves were applied. With the exception of m-xylene and p-xylene, all of the target compounds can be well separated and quantitatively identified. Fig.1 shows the linearity of some compounds. The RSDs of 39 target compounds were listed. All of them were qualified with EPA TO-14 criteria (30%) and most of them within 10%. MDLs were estimated with 7 repeated measurements of a secondary diluted standard gas of 0.5 ppbv and calculated as three times of their standard deviation. Blank spike (BS) and blank spike duplicate (BSD) were tested. The previous stands for recovery of a 10 ppbv standard and the latter for RPD (relative percentage deviation) of two duplicates of BS. System and canister blank were also checked using 1.5MDL as report Limit (RL). 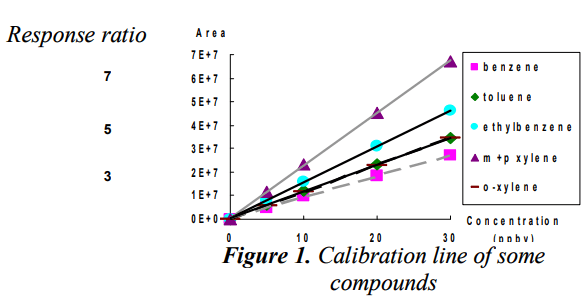 16 major VOC species were observed (Fig.2) in cleanroom 1 in which there were 4 Freons, 4 carbon chlorides and 8 aromatics. Since few of the aromatics were raw materials or byproducts in production, the majority was thought to be transferred from outside the cleanroom. Further discussion will be held on this issue in section 3.3. The first two types maintained a relatively low and steady concentration level below 2 ppbv. While the aromatics detected presented a higher and more fluctuating range from 0.2ppbv to about 20ppbv. Possible reason for the difference was that Freons and carbon chlorides shared an fixed source, however, the aromatics were widely and variably emitted.

In addition, an extra large quantity (estimated to ppmv level using response ratio of toluene) of perfluoro-hexane was observed in module C (see Fig.3). This compound may be used as a remover of carbon residues in instrument chamber walls after relevant process. Its effects on both the staff and processes are still unknown due to limited data on its physical and chemical characteristics. 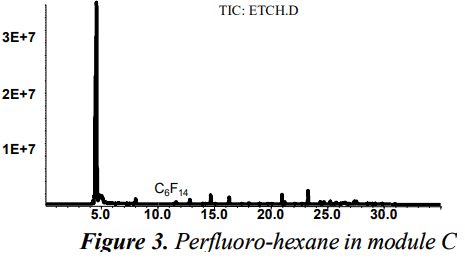 Room 2 was tightly monitored for VOC contamination, which may suspected to influence severely one module of the process. An index named AVOC, which summarized concentrations of the following 8 major components (all aromatics): benzene, toluene, ethylbenzene, m+p+o-xylene, benzene, 1,2,3-trimethyl and 1,2,4 trimethyl, was applied to the monitoring. 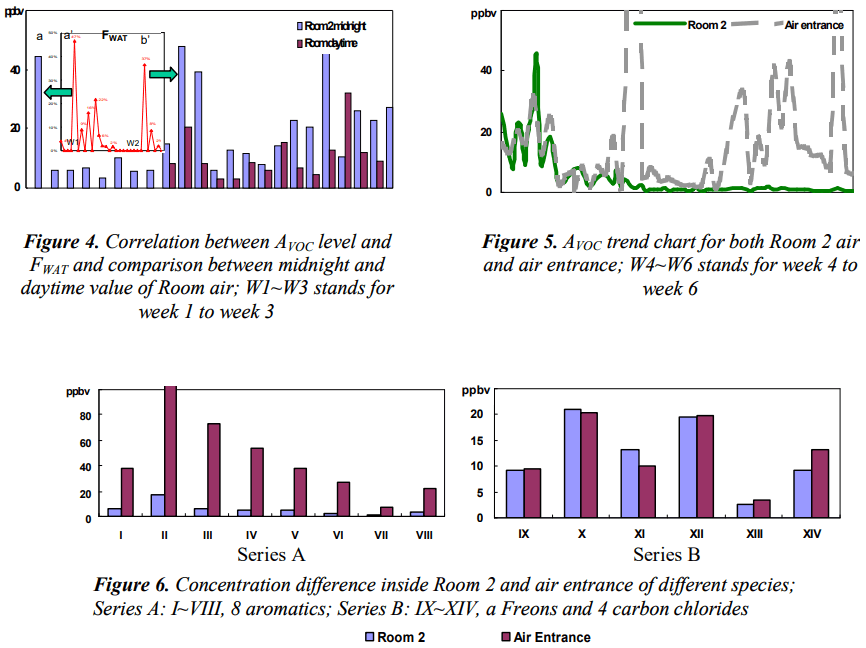 Fig. 7 showed the TIC of outgassing VOCs of contaminated wafer surface (II) compared with room air VOCs (I).Peak e stood for Benzene – d5, chloro (Internal Standard). Peaks a, b, c and d were assigned to butanal, benzene, tricyclosiloxane, hexamethyl- and toluene according to their mass spectra. The four species were in a relatively low concentration in room air while richly condensed on wafer surface during its exposure. Benzene and toluene, as mentioned above, transferred mainly from outside air. Their impairments to production were reconfirmed by target wafer contamination simulation and Wafer Acceptance Test. Tricyclosiloxane, hexamethyl, which was barely seen in room air, was dramatically concentrated. Some sealants used in cleanrooms were thought to be the source of this compound. So far its direct impact was not specified and further research was required. 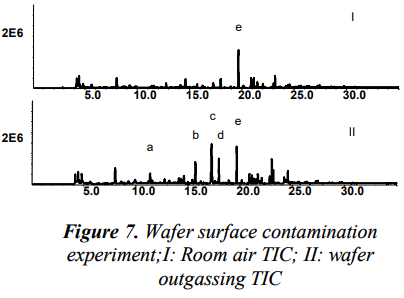 EPA TO-14 method was optimized and applied successfully in a semiconductor foundry lab. Typical species detected and measured in the cleanrooms were some aromatics including benzene and toluene, some Freons and a few carbon chlorides. A majority of the contaminants transferred mainly from outside environment, but the root origin, especially the aromatics, were to be explored. Among the contaminants, benzene and toluene, together with a barely observable compound, tricyclosiloxane, hexamethyl, have a strong tendency to be adsorbed on wafer surfaces. Most of them had an adverse impact on production and caused yield loss. Thus, it’s critical to control VOC level in semiconductor cleanroom air besides airborne particles, metals and ammonia in modern ULSI industry. Quantitative relationship between different VOC species and product defects and yield loss would soon be studied in the next project.